You are here: Home / Archives for Church Staff 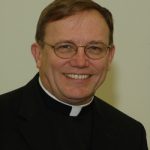 I wonder if the creator of the lectionary was having a little December 31 fun with the first reading beginning, it is the last hour and the gospel starting off, In the beginning. Ending the year with the prologue to St. John’s gospel seems fitting. The structure of the passage is the key to its… Read More »

When Assyria conquered the northern kingdom of Israel they deported the ten tribes there and they, apparently, never returned — as did the tribe of Judah deported from the southern kingdom by the Babylonians almost 200 years later. The “lost tribes of Israel” have entered into cultural myth. However, the Bible suggests maybe they weren’t… Read More »

In the days after Christmas we read from the first epistle of St. John. To understand its message it helps to know the context in which it was written.  The epistle of St. John is written in response to a crisis in the church. Certain people were claiming they were the true believers and anyone… Read More »

The feast of the Holy Innocents is a reminder of the suffering that children have endured throughout the ages.  It should inspire us to do what we can to protect innocent life. On a more theoretical note, this feast has inspired theological reflection on the statement in the Apostles’ Creed that Jesus “descended into hell.”… Read More »

Last July I clipped a cartoon strip from the newspaper and put it on my bulletin board. The pig character is very happy about the pandemic. “I’ve been given a whole year to focus on what’s important to me all the while spending more time with my loved ones.” I wonder how he is feeling… Read More »

In 415 the bones of St. Stephen were miraculously discovered on December 26.  St. Augustine commented on how wonderful it was to receive a relic of the first martyr in his African city. So in one sense it is sheer coincidence that the feast of St. Stephen, protomartyr, is celebrated on the day after Christmas.… Read More »

Without the gathering and the going out and singing “Adeste Fideles” together it doesn’t feel like Christmas has in the past. No egg nog and tree decorating this year made it hard to get in the spirit. You have heard, no doubt, (since these songs are played on an endless loop on the radio) the… Read More »

Once on a retreat I was telling the director all the things I wanted to do for God. He laughed at me. “You don’t do for God,’ he said, “God does for you.” That is what King David found. He wanted to build a house for God. The prophet had a vision which he relayed… Read More »

At the beginning of the Christian period traditional Jewish Biblical scrolls were collected in a codex, the ancestor to a book. Christians ordered what we call the Old Testament with the books of the prophets at the end, showing continuity between the words of the prophets and their fulfillment in Jesus. Doing so made Malachi… Read More »

God has cast down the mighty from their thrones and has lifted up the lowly. He has filled the hungry with good things, and the rich he has sent away empty. These words from Mary’s prayer (usually called the Magnificat after its first word in Latin) serve as a reminder that the coming of Jesus… Read More »

To attend Mass via Zoom, click on the desired Mass listed below.