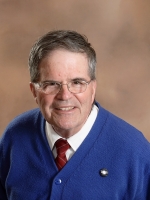 Brother Christopher Buck, FSC was born in Chicago and grew up on the North Side.  He attended Our Lady of Lourdes Grade School and Graduated from Saint George High School in Evanston.  In 1960 he joined the Brothers of the Christian Schools.  Br. Chris received his undergraduate education at CBC College in Memphis and Saint Mary’s College in Winona, Minnesota, and as a graduate student, studied at Notre Dame University.  Brother taught Religion and Mathematics at Roncalli High School in Aurora, Gabriel’s High School in Lansing Michigan, Driscoll High School in Addison Illinois, and Saint Joseph High School in Westchester Illinois.  While at Saint Joseph, he became the manager of the Business Office.  Br. Chris is now retired, living near De La Salle High School and spending his time as part time bookkeeper at Saint James and volunteering at the Illinois Railway Museum.  Br. Chris is happiest when riding a train with his brother Dan.

Download the Our Church app to easily connect to St. James (Wabash) from your mobile phone.